Reconstruction as an Insurgency 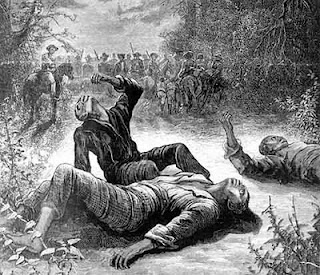 Cross posted from Blog Them Out of the Stone Age
Mike Few, the editor of Small Wars Journal, recently interviewed me about Reconstruction as an insurgency. Here's his first question and my response:

Mike Few: Traditionally, social scientists, viewing conflict through the lens of the state, prefer to quantify wars as resulting in a win, loss, or tie; however, history shows that the construction, reconstruction, or deconstruction of the state following a conflict is often a long process with mixed results. Why did the Civil War not end after Confederate Gen. Joseph E. Johnston surrendered to Union Gen. William T. Sherman at Bennett Place, Durham, NC and General Robert E. Lee surrendered the Confederate Army of Northern Virginia to Lieutenant General Ulysses S. Grant, at the home of Wilmer and Virginia McLean in the rural town of Appomattox Court House, Virginia?

Mark Grimsley: It’s important to acknowledge that in an important sense, the war did end in 1865, because the federal government’s two goals—the restoration of the Union and the destruction of slavery—had both been achieved. White southerners gave up the idea of an independent Confederacy, and they showed every sign of accepting the lenient terms for return to the Union offered by the administration of Andrew Johnson. The Republican-controlled Congress, however, believed that more stringent terms were necessary to achieve the fruits of victory. In the words of Richard Henry Dana, a prominent Republican, they insisted on holding the former Confederate states in “the grasp of war” until the political dominance of the Southern elite was eliminated. A key component of their plan to accomplish this involved the imposition of universal male suffrage for African Americans. Essentially, the Reconstruction insurgency was a successful effort to break the grasp of war and restore what Southern conservatives termed “Home Rule.”

A more clunky response, since you mention social scientists, would be to point to the Correlates of War Study, which defines a war as any event that results in a thousand or more battlefield deaths each year. If you substitute “deaths from political violence” for “battlefield deaths,” then several years during Reconstruction would come close to meeting this standard. In Louisiana alone, for example, an estimated 2,500 people perished between 1865 and 1876.

The Civil Warriors Wordpress site has been plagued with malicious script, and what with the demands of work and life I haven't yet found time to address the issue decisively.

Luckily, I discovered that I could create a redirect to its former home, namely the blog on which you've just landed.

So Ethan and I are back in action.

The server for the Wordpress edition of Civil Warriors is down. It should be back shortly. If not, we'll publish on this site until it is.
Posted by Mark G. at 4:22 PM No comments:

I created this site as an experiment and have discontinued it, choosing instead to consolidate all my history-related blogging on a single site, Blog Them Out of the Stone Age. You'll find Civil War-related entries there.
Posted by Mark G. at 8:06 AM 1 comment:

Welcome to the temporary bivouac of Civil Warriors, a collaborative effort between Mark Grimsley, a professor of history at Ohio State University, and Ethan Rafuse, a professor at the U.S. Command and General Staff College.

Our permanent encampment, at CivilWarriors.net, has temporarily been bushwhacked by malicious script. Until the problem is solved, we'll conduct operations from here.